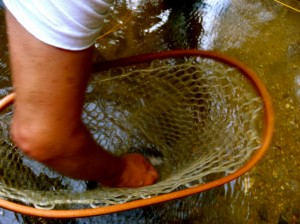 With the temps heating up in the early to mid afternoon our trips have been hitting the streams anywhere between 6am and 7am to take advantage of the cooler morning hours.

On Thursday Clint and I both had half day trips on the Western North Carolina Fly Fishing Trail (Caney Fork and Scotts Creek).  I guided Thomas B. from Irvine, CA and Clint guided Michael J. and his father from Virginia.  Thomas ended up with several nice rainbows in the net and several nice Long Distance Releases (LDRs) as well.   Hot flies were #14 Yellow PMX with a #16 Pheasant Tail with hot orange collar as the dropper.  We hooked a good number of fish on the dry as well as the dropper.

We were both out again yesterday, Clint guided Michael C. and his father from York, SC and I guided Everett W. from Boone, NC.  Clint’s trip ended up having the best day of the two trips with close to 25 fish in the net including several decent rainbows in the 10-14″ range.  Clint’s hot flies of the day were #16 BH Prince Nymphs and 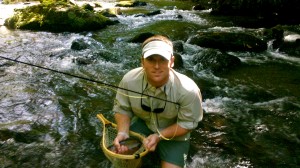 Today I had the pleasure of guiding another father and son duo, Richard L. and Clayton L., from Jacksonville, FL.  We started the day out with a little introduction to casting  at nearby Bridge Park here in Sylva.  After getting the overhead, side-arm and roll casts down we headed up to the upper Scott’s Creek area.  We had a fairly successful day with both anglers reeling in some trout.  Richard landed several nice wild bows and one decent sized stocker.   Most of the fish were taken on a #14 Yellow PMX with the bigger stocker on a #12 Superflash Pheasant Tail. 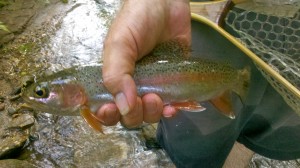