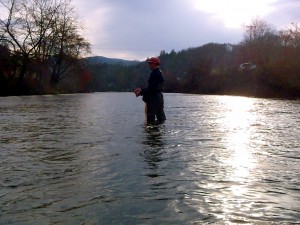 It’s been a busy week here at Hookers Fly Shop and Guide Service.  We have had several trips out on the Tuckasegee Delayed Harvest and a ton of customers coming into the shop.  Our flies have been flying off shelves (all pun intended).  Trip booking for March, April and May have been strong and we are excited about the upcoming spring season.  New gear has been arriving over the last week  and our remaining spring orders will be arriving over the next few weeks.  We have plans to add a new Rod company and Reel company to our lineup so be on the lookout. 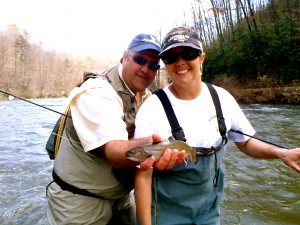 As I mentioned before we have been extremely busy guiding new and repeat clients on the WNC Fly Fishing Trail and surrounding areas.  Yesterday, I guided repeat client Karl B. and his brother Gary on a 3/4 wade trip on the Tuckasegee Delayed Harvest.  The day started out pretty good with several brook and rainbows brought to the net.  As we fished into the afternoon the bite seemed to slow.  However, Karl and Gary both added several more rainbows and brook trout and Gary landed two browns to give him the Tuckasegee Grand Slam (Rainbow, Brook & Brown).  Most fish were taken on #8 Hot Head Marvins (olive/black) and several were taken on olive and black Wooly Buggers.

Today, Clint and I had a group of four anglers from the Charlotte area.  I guided Steff and Alan on a section of the Tuckasegee Delayed Harvest along South River Rd.  Alan landed several fish just minutes into the trip and ended up with the grand slam with his first three fish of the day.  Steff worked hard for her first fish but it was well worth it when she hooked into a beautiful 14-15 inch brook trout.  She ended up with several more bows and brook trout.  This was Steff’s first trip on a larger stream and only her 2nd or 3rd time fly fishing.  Overall she did exceptionally well.  Clint’s trip also had a great day and ended up hooking into not one but two fish over 20 inches.  The first fish was a huge rainbow pushing 25 inches.  The second fish was a beautiful 22 inch brown.  Hot flies of the day were #8 Hot Head Marvins (brown and olive/brown), Rainbow Prince Nymphs and several junkfood patterns (i.e. eggs, Squirmy Wormy & Pink San Juan Worms).  What a way to spend the weekend:  beautiful weather, hungry fish and some great company on the water. 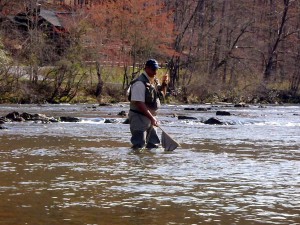