Today was another fantastic day on the water here in Western North Carolina.  The skies were overcast with light rain with a few flurries here and there, perfect weather for fishing for big hungry trout.  I met up with Jalen Morton and Jared Silver who had been fishing along South River Rd.  for several hours.  As I was getting geared up Jared mentioned that Jalen had already hooked into several big fish.  Jalen was throwing some of his signature streamers and he was whacking trophy trout with them.  Pictured is one of several 20″+ fish Jalen had put in the net. 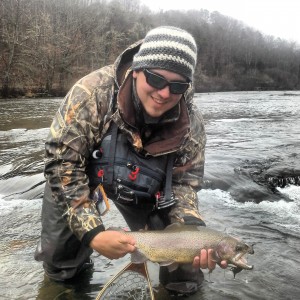 Jalen with a massive Tuckasegee Rainbow

I wasn’t really interested in slinging large streamers since I only had my 10′ 3wt nymphing rod and it was already rigged up from fishing the day before.  As soon as I stepped in and made the first cast I was hooked up on a 12-13″ rainbow.  I pulled in 8 or 9 more fish over the next few minutes but nothing over 13″.  After watching Jalen land that massive bow I was thinking that it was only going to be a numbers day for me and next thing I know I’m reeling in a 20″ fish myself.  The fight didn’t last long as I applied just a little too much pressure and snapped him off.  At this point I had almost given up on landing a big fish for the day but quickly found myself battling another large fish.  This one wasn’t as large as the first but still measured in at 18″.   Hot flies for me were #14 Olive Jig Flies with a #16 Pheasant Tail and #8 Tungsten Coffee/Black Marvin Stonefly. 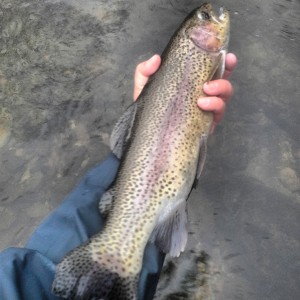