Yesterday, I had the pleasure of guiding longtime clients Scott B. and Dwayne H. from Charlotte, NC.  Every time I am out on the water with these guys it is a fun, and usually a very productive, day.  Yesterday was no different.  They also brought along beginner fly fisher Brett for his first ever guided trip and his 2nd time on the water. 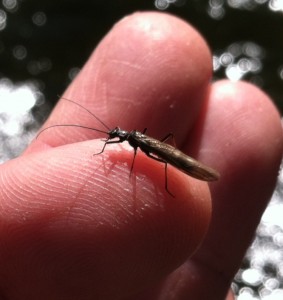 These guys always get into big fish when they are here, so we chose the Ravens Fork Trophy Section as our playground for the day.  I began the morning with Brett, teaching him some casting techniques and how to read the water.  He quickly picked up the roll cast, and not long after, his first fish on the fly.  Pictured below is a 19″ bow that took a #16 Just Add Water Nymph that I had tied up the night before.  This is by far one of my favorite nymphs to throw.  It is extremely effective in low light conditions, most likely due to the Brown UV collar.   Click here to purchase Just Add Water Nymphs. 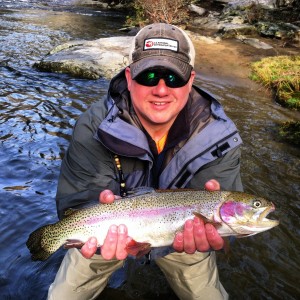 Brett with his first ever trout on the fly. This pic was taken on a #16 Just Add Water Nymph tied on Syndicate Hooks.

As the morning went on Brett got several more strikes but none in the net.  Scott and Dwayne went off on their own, and we later met them down near the confluence of Ravens Fork and the Oconaluftee.  Scott had picked up a couple rainbows, and Dwayne had also gotten one in the net.  The area began to get covered up with anglers and other guides so we drove upriver and got in.

It wasn’t long before Brett reeled in another big beautiful bow.  This fish decided to eat a #8 Black and Coffee Hot Head Marvin and put up one hell of a fight.  Even though it was Brett’s first day fly fishing, he looked like a seasoned pro when fighting and getting these fish in the net. 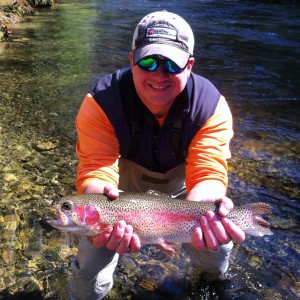 Not to be out done by newbie Brett, Scott stepped in the water and soon pulls in a huge bow of his own.  Scott’s only word when hooking into this fish was, “Pig!” 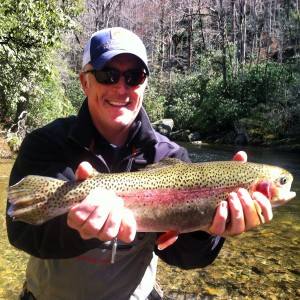 Unfortunately this picture doesn’t do this fish justice. This was probably the biggest fish of the day.

As the day started winding down, Brett and I left the field hole and went down to the bridge, just above the high school.  Most of the runs and pockets were washed out here due to high water, but we spotted one area that looked like to could hold a monster.  After about a dozen or so casts into this pool, Brett’s line went tight and the fight was on.  This would turn out to be Brett’s biggest fish of the day. 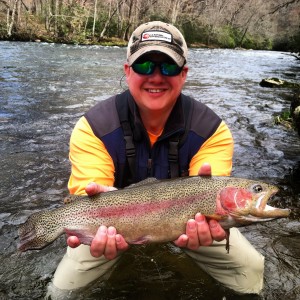 Since I didn’t get any pics of Dwayne’s fish here is a pic from a past trip on the Ravens Fork. 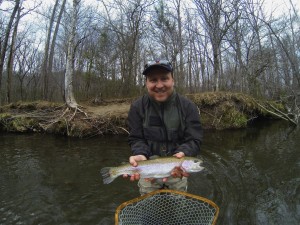 Book your next fly fishing adventure with the guides at Hookers Fly Shop and Guide Service.

You can also book your fly fishing trip online.  Click here to book.