I took Bike Shop Andy of Bryson City Bicycles and his good buddy Barry out on a Friday evening adventure float this past Friday.  Oh sure, most guided trips are pretty safe bets and the guide generally knows what he/she is doing and where s/he is going, but if you want to take a guided trip in its purest form, go on a trip with a guide who has

(1) never been to the location or

(2) for even more fun go where the guide has only been once.

For me, (1) is the obvious adventure since no one knows what is up

(2) is also fun because the guide thinks he knows what’s up and it is fun to see how many times he can be wrong in one trip.

Things started out interestingly enough as we drove through a monsoon just to get to the river.  Finally,at roughly 5 o’clock we were in the boat.  Now sometimes it is hard to judge just how many river miles equate to how many road miles.  In this case we figured out that there were more road miles than river miles even after we drove a long way and it was late, but we thought we were fine.

Turns out we were very wrong about that.

The fishing started out hot with multiple strikes on Barry’s spinning rig with an aqua/blue rapala style lure and Andy on the whip stick with a Clouser.  The river was temperamental and would get cloudy then clear then get cloudy again.  The fishing would take fits too.  Barry stayed the most consistent with his spinning rig bringing more to boat. 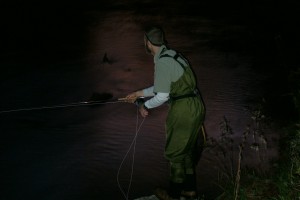 Cris in the Dark

Then the darkness decended…

As the sun set the bewitching hours of top water action came with several strikes on poppers until it became increasingly dangerous to whirl hooks in tight quarters.  This is always my favorite time to fish, for anything really, but especially bass.  Then I remembered that I would have a hard time remembering where the take-out is if I couldn’t see.

I noticed it was dark – Really dark.

Andy came up with the thought of one of us (being him) abandoning ship (wisely) and following the road to the truck to solve the unknown location dilemma.  Upon his journey back he found a way better place to take out and we made quick work of the shuttle run and we were all in route to food at around 11:00pm.

To say the fishing alone made this all worth it, would be too much exaggeration, even for a fishing blog.  But you simply can’t put a price on safely learning things the hard way, which is what guiding and learning to guide is all about. The client pays us to pay our dues.  Sometimes though, the expense is better willingly shared.

Posted under Smallmouth Trips,Uncategorized
Comments Off on Getting Adventurous with guest blogger Cris!