Just a short drive from Bryson City, NC you will be one of the finest trout streams in the US.   The Nantahala River is known the world over for its great white water action, and is a place that truly exemplifies a great trout river. The Nantahala River is listed as one of the nation’s top 100 by Trout Unlimited.  It has also been featured in Eastern Fly Fishing and many other publications. 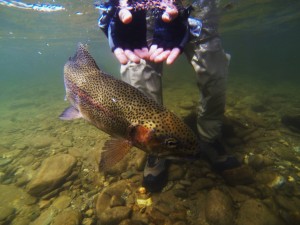 Release shot of a large rainbow in Cherokee, NC

The Nantahala above the power house is designated Delayed Harvest, this is a favorite among anglers because of the great action year round, and high fish counts. One can catch numerous stocked trout as well as wild trout, the excitement in this particular section is endless. 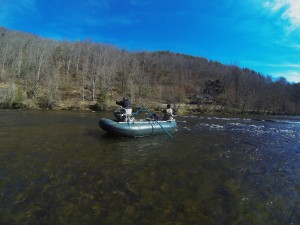 Below the power house the river changes faces once again to an impressive tailwater fishery. This is the section of the river where the world class white water rafting and kayaking take place. The fishing is great year round in this section too, even during the summer months when the rafting is going on. The Nantahala here features many deep pools, numerous runs and riffles that hold truly large trout. Matter of fact the North Carolina State Record Brown Trout came from this portion of the Nantahala, weighing in over 24lbs 10 oz!  Talk about putting a smile on your face!   The Nantahala River is truly a place worth visiting while in Western North Carolina. 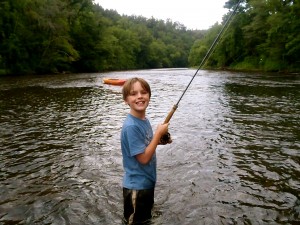 Also, located just outside of town is the Great Smoky Mountains National Park.  Just a few miles from downtown Bryson City you can find access to Noland Creek, Forney Creek and Deep Creek.  All fine trout streams loaded with plenty of brown, rainbow and brook trout eagerly waiting to take a fly. 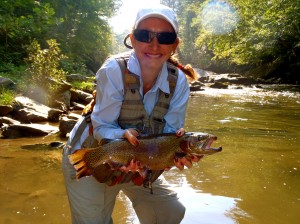 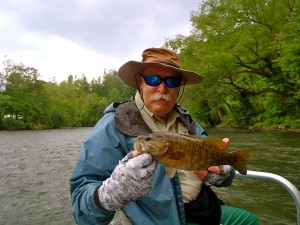 Dan with a nice smallmouth on the Lower Tuckasegee

Book a guided fly or spin fishing trip now.  828-587-4665 hookersflyshop@yahoo.com or use the convenient form below to book a trip or inquire about our services and one of our employees will contact you in less than 24 hours to confirm the trip.  In the message line list the type of trip, length, number of anglers and the date of the trip.