Julie with a nice brook trout under the Webster Bridge

It has been a very busy weekend here at Hookers Fly Shop and Guide Service.  Yesterday, I had the pleasure of guiding Tom on a half day trip on the Tuckasegee Delayed Harvest.  It was a fairly slow day with just a few fish brought to the net with several long distance releases.  Fish were taken on a #8 Olive and Black Hot Head Marvin. 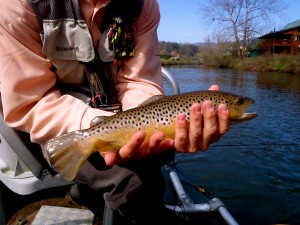 Robert with a nice brown

Today, I guided Julie and Robert R. from Athens, Ga. on a full day float trip on the Tuckasegee River.  Julie caught four 15-17 brook trout and probably 15-20 rainbows.  Robert got the grand slam with several nice brook and rainbow along with the big brown pictured to the left and even one red-eye bass.

During the late morning and early afternoon there was a large Caddis hatch and a small sporadic Sulphur hatch.

Overall fantastic couple of days on the water spent with some great company. 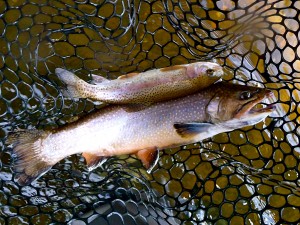