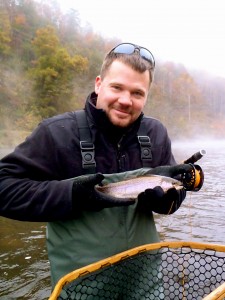 It’s been a busy week here at Hookers Fly Shop.  We have had several trips out and guides Cris Weatherford and Clint Holcomb fished in the Rumble in the Rhododendron this past weekend.

On Friday, I guided repeat client and good friend Daniel B. from Alabama.  It was a bit slow but all three gentlemen landed some nice fish including a really nice brown.  It was a good day on the water with a great group of guys.  Fish were taken on #8 Olive/Dark Olive Hot Head Marvins and a #16 Tungsten Surveyor.

On Saturday, I guided brothers Lee and Reed J. and friend  John from southern Ga.  Reed started out the morning pretty hot with several rainbows and a brook.  John and Lee had a slow morning but picked up some nice fish in the late morning/early afternoon.  Lee landed a 16″ inch bow and John got his first trout on the fly!  Great day on the water with some great company.   Most fish were taken on #8 Brown Marvins, #10 Y2K and #16 Rainbow Warriors.  These guys are already talking about another trip in the Spring.

Yesterday and today, I had the pleasure of guiding Dan C. from Atlanta, Ga.  This was Dan’s 5th trip with me and we normally fish the Tuckasegee for trout or smallmouth.  This trip, Dan wanted to try some small mountain trout streams, so yesterday we fished the Upper Oconaluftee just above Kephart Prong.  Dan ended up with several rainbows and browns in the net including the beautiful rainbow pictured below.   Most fish were taken on an #16 Orange Soft Hackle and a #14 Yellow Caddis.  Water temp was 48 and there were was very sporadic hatch of Yellow Stoneflies. 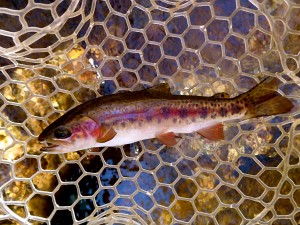 Today, Dan fished the lower and upper sections of the Tuckasegee Delayed Harvest.  He landed somewhere around 20 trout and a one big Red Horse.   Fish were taken on a #8 Yellow/Brown Hot Head Marvin, #18 Griffiths Gnat and a #16 Copper B.H. Hares Ear.  Dan also landed several brook trout on a #6 tan Sculpzilla.