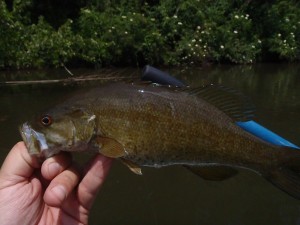 Today, Tim and I guided a great group of guys on a smallmouth float trip on the upper Tuckasegee River.  We were going to float the Dillsboro to Barkers Creek section but the thunderstorms the night  before dumped a lot of rain, which muddied up the lower sections of the Tuck. 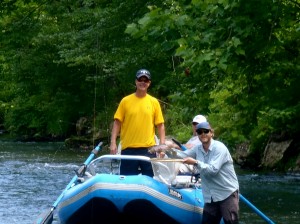 We decided to put in below the Cullowhee dam and float to the Delayed Harvest put in on South River Road.  Frank, Stan, Joe and Wayne caught several nice smallies and plenty of rainbow, brook and brown trout as well.  Many fish were taken on orange, olive and yellow (perch) clouser minnows and hot head marvins.  Joe brought several trout to the boat that were in the 17-18″ range.  Stan landed some nice smallies on the clouser minnow but the big smallie of the day came on a dark brown hot head marvin.  He also ended the day with a grand slam.  Wayne and Frank brought some nice trout and smallies to the boat as well.  This was my second time guided Frank and Stan.  Last year they did a trip with us on the Upper Nantahala and had a spectacular day on the water.  I look forward to guiding these guys again this fall or next spring. 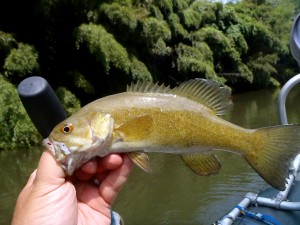