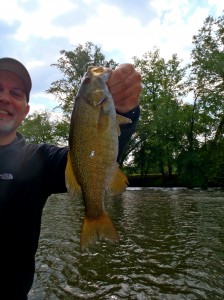 Smallmouth action in Western North Carolina will be heating up in the next month or so.   We offer both wade and float trips on the Little Tennessee and the Tuckasegee River.  Anglers can choose spinning rods, fly rods or both.  Our favorite float is the lower Tuckasegee River.  Here we can float several sections of river from Dillsboro, NC all the way to Bryson City, NC.

These sections of the river typically do not receive a lot of pressure so there are always plenty of fish – and big fish too.  Check out our photo gallery to see some of the 5-6 pounders this river produces.  The Little Tennessee usually produces high numbers but smaller fish on average.  The Lower Tuckasegee is also home to large Rainbow and Brown Trout as well as Redeye Bass, Largemouth, Perch, Walleye and Muskie.

Our guides are some of the most experienced guides in the business.  Our trip leader, Jason Cole has been leading trips on these rivers for over 8 seasons now.  We also float more sections of river and run more trips on these rivers than any other outfitter in the area.  We suggest booking the smallmouth trips at least several weeks in advance as they tend to fill up fast. 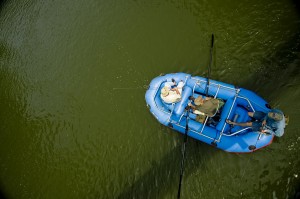 Floating the lower Tuckasegee with clients