Yesterday I had the pleasure of guiding Chuck L. and his son Henry L. from Charlotte, NC.  We fished a section of the Scott’s Creek Gorge that has been producing a few stockers and plenty of wild Rainbows.  Chuck began upstream from Henry and I as I was giving Henry an introduction to fishing small streams with little to no casting room.  About 10 minutes into the trip Chuck comes back down stream to tell us he has a 16″ rainbow on the end of his line and of course when we got back up there the fish had already worked itself off so we missed a great photo opportunity.  Henry ended up with this nice rainbow. 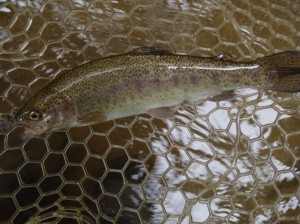 We ended the day with several more fish brought to hand and several L.D.R.  I look forward to seeing you guys again in August and in the Fall for the fishing on the Tuck.

Today I met and guided Thiery T. from Blacksburg, VA on Scott’s Creek.  It was a perfect overcast day with lower than normal temps, which 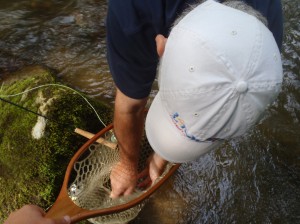 made for a very successful day on the water.  Thiery landed several wild rainbows in the 9-10 inch range and plenty of 5-7 inch bows as well.  Thiery also gave a few fish the 5 foot hand shake (gentleman’s release).  I also had the pleasure of hearing some fantastic stories about trout fishing in France and Spain.  What a great couple of days of guiding with some wonderful people and memories that will not soon be forgotten.

Posted under The Fly Fishing Trail
Comments Off on Guided Trips July 16th and 17th, 2011