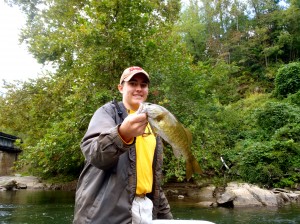 On Tuesday, Cris guided a half day trip for Rick C. and son Jacob on the Cherokee Trophy Water.  He reports a pretty slow day with only three fish brought to the net.

Yesterday, I guided Rick C. and son Ricky on a 3/4 day float on the Lower Tuckasegee.  We had a fairly successful day with 20-21 smallies, half a dozen red-eye bass and one largemouth brought to the boat and probably 8 or 9 L.D.R.s.  A couple of the smallies were around two pounds with most of the others in the half pound to 1 1/2 pound range.  A very fun day on the water with some great company.

Today, I guided  Robert C. on a half day trip on the Trophy Water.   I met him at the River Valley Campground around 7am and we took a short drive down to the Job Corp bridge.  We hiked down to the confluence of the Oconaluftee and Raven Fork where we spent most of our time chasing Palominos and several 20″+ rainbows.  We brought several decent rainbows to the net and had a few more nice fish on.  About an hour into the trip we were lucky enough to see a group of 8-9 elk cross the river just 50 yards above us.  I was too slow with the camera to get a good picture.  Fish were taken on #12 Orange Madam X, #18 Griffiths Gnat and #8 Hot Head Marvin (Dark Olive/Olive).  Overall another good day on the water.

We look forward to seeing Rick and family again next year.  Tight lines!