It has been an up and down few weeks here in the Smokies.  With all the rain the region has seen over the last few months it has been tough to frequently get out on the streams.   The Tuck is just now beginning to be at a level that is easy to wade as long as they are not generating too heavily.   Most of the smaller streams in the area are still running higher than normal, which will be good for the summer months when the levels begin to really drop.

Over the past couple of weeks we have had float trips on the  Tuckasegee and wade trips on the Nantahala, West Fork of the Pigeon and many of the small streams in the Smokies and Western North Carolina Fly Fishing Trail.  The float trips have been decent with some very nice fish being brought to the net.  Heavy streamers and various nymphs, egg and worm patterns have been extremely successful.  The Nantahala has been producing some good numbers and nice fish as well.  Fish have come on a wide range of flies including Yellow Stoneflies, Wooly Buggers, Eggs, Squirmy Worms, Midges and various BH nymphs. 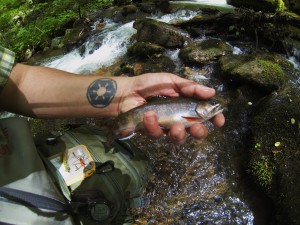 We have also spent time on several streams in the Smokies including Hazel Creek, Oconaluftee, Little River and more.  The small streams on the Western North Carolina Fly Fishing Trail have also been fishing well.  Scotts Creek and Caney Fork/Rough Butt Creek/Mull Creek are higher than normal but dry dropper rigs and double nymph rigs have been the ticket here.  Yellow Stoneflies, Copper Johns, Prince Nymphs, Just Add Water and Hot Head Marvins have all been producing some nice fish on these small streams. 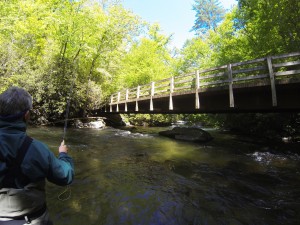