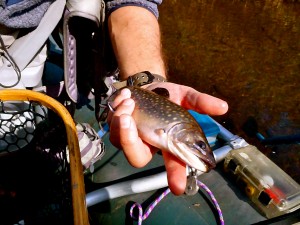 Mike with a pretty Brook Trout on a Tuckasegee Float

Hookers Fly Shop guides Jason Cole, Clint Holcomb, Jesse and Aaron Lambert have been out on the Tuckasegee Delayed Harvest pretty much since the first stocking on the Oct. 4th and 5th.  We are still seeing heavy crowds on the weekends and decent crowds on the river during the week but it has slowed slightly since the first of October. 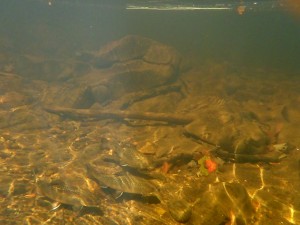 This week we had trips out every day except for yesterday as we had to cancel a float trip due to weather and low water conditions.  On Monday I had a 3/4 day float with Mike A. and son Grayson from Upperville, Va.  It was a pretty good day on the water with plenty of rainbows and brookies brought to the net.  It was Grayson’s first time fly fishing and he quickly landed 5 or 6 fish in the first half hour with one decent bow around 16″.

Clint also had Tim M. and his wife out for a second day of fly fishing on Tuesday.  Clint reports a decent day with some nice fish in the net and plenty that got away.  Hot flies were #10 Yellow/Orange Y2K, #8  Brown Marvins (Olive/Dark Olive), #18 Tailwater Sow Bugs, #16 Rainbow Warrior as well as #16 Para Adams and #18 Griffiths Gnats.  The Para Adams and Griffiths Gnats were fished as a dropper rig in the early to mid morning for plenty of rising fish.  I had WCU student Nick T. out on Tuesday as well.  Nick did pretty good.  He brought somewhere around a dozen fish to the net with several nice Rainbows and Brook trout.  Most fish were taken on #8 Brown Marvins and #10 Y2K.

Today I guided Tim B. from Kennesaw, Ga.  We fished a section of the Tuck that hasn’t received as much pressure as some of the area above the island.  Tim got into them on the first cast.  We ended up with close to a dozen in the net and just as many long distance releases.  The big fish of the day was a 23″ Brown that took a #8 Olive/Dark Olive Brown Marvin.  Talk about one happy client! 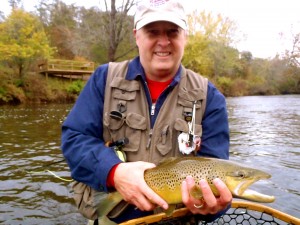