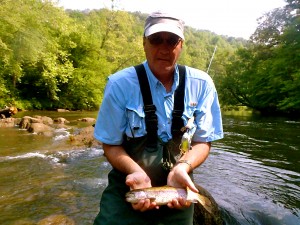 Don with a nice Tuckasegee trout

Saturday, I had the pleasure of guiding a 3/4 day wade trip for Don Tomas the President of Southwestern Community College.  We could not have asked for  better weather with highs in the mid 70s and partly cloudy skies.  We fished the middle and lower sections of North River Rd. on the Tuckasegee Delayed Harvest.  On the middle section Don brought 12-13 rainbow and brook trout to the net.  Most fish were taken on a #8 Olive/Black Hot Head Marvin with several fish taken on a #14 Rainbow Warrior 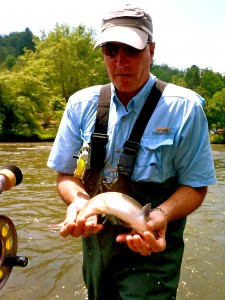 Around lunch time we decided to drive on down to the lower section on North River Rd.  There were a few more anglers there but it wasn’t overcrowded like the South River Rd. section was.  There, Don picked up 12-13 more rainbow and brook trout and one wild brown completing the Tuckasegee Grand Slam for the day.  Almost all fish came on the Hot Head Marvin and a couple of fish were taken on the Rainbow Warrior.  Overall fantastic day on the water with some great company.   I look forward to fishing with Don again for Smallmouth later on in the summer.

This week is shaping up to be a busy week with Clint, Tim, Cris and myself out on the water with trips.  We have several wade and float trips and one backcountry trip into the Great Smoky Mountains National Park already booked.