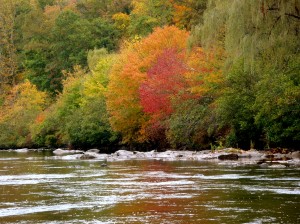 You gotta love it when you get a good dose of “liquid sunshine”.  Well Ed F. and I had plenty of it while fishing on the Tuckasegee Delayed Harvest today.  This was my fifth time guiding Ed and as always, it was a pleasure.  Ed ended up with close to 20 fish in the net and he even got the “Tuck Grand Slam”-Rainbow, Brook and Brown. 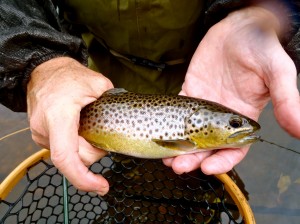 We started the morning about 300 yards above the island and found several nice runs with plenty of fish.  Ed quickly landed 8 or 9 fish in the first hour.  The fish were taken on a #8 Yellow/Brown Hot Head Marvin with a #14 B.H. Hares Ear dropper.  It began to slow down around 12:30 so we decided to drive up stream and break for lunch.   After we ate lunch at the boat launch below Hwy 107, we worked our way down to the Smoky Mountain Getaways cabins on Dillard Road.  Ed had been talking earlier about getting some fish on dry flies and here we found plenty of hungry fish rising to midges.  We tied on a #16 Parachute Adams with a #20 Griffiths Gnat dropper.  Ed ended up with three or four on the Adams and three on the Gnat included a fat little brown trout.

Despite standing in the rain for most of the day it was a fantastic time on the water with some great company.