Right now is the time to book your fly fishing trip in Western North Carolina.  With the recent March stocking of the Tuckasegee Delayed Harvest section the fishing over the  last week has been fantastic.   We have been out on float trips and wade trips as the water has been wader friendly in the am and higher in the pm.  Last weekend I had the pleasure of guiding Ben and Mike on a full day and 3/4 day trip along the Tuck DH. 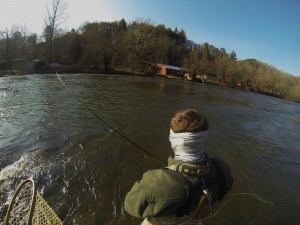 On Sat. we fished a section along North River Road, which is the lower section of the Delayed Harvest.  Here Mike and Ben landed some high numbers and some decent fish in the 13-15″ range.  Mike had the fish of the morning on but failed to get him all the way to the net.  It was a large rainbow that looked to be around 17-18″.  After cooking the guys a shore lunch and having a short break relaxing along the stream side we decided to head up to the island area along South River Rd.  The fishing was still good but a little slower than the morning hours.   The hottest fly of the day was an Olive/Black Hot Head Marvin size 8. 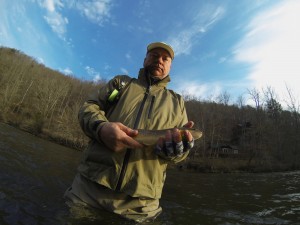 On Sun. I met the guys bright and early at their cabin and they fished the upper section of the DH along South River Rd.  Ben and Mike put plenty of fish in the net including the big brown picture above.  Again, the morning hours were fantastic and things seemed to slow around Noon.  Overall fantastic day on the water with some great company.

Yesterday, I had the pleasure of guiding Lauren, David and John on a 1/2 day wade trip on the upper section of the Delayed Harvest.  Lauren, who is only 13 years old, was the first in the water and she hooked into a nice fish on the first cast.  Talk about the perfect way to start the day.  John and David weren’t far behind and quickly got into several nice fish in the first 15-20 mins.  David landed the very healthy rainbow pictured below.   The trip was originally scheduled as a 3/4 but the wind picked up around 11am and it became too difficult to cast. 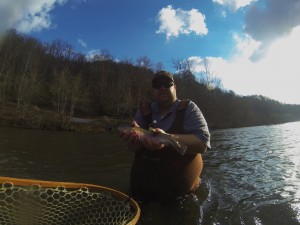 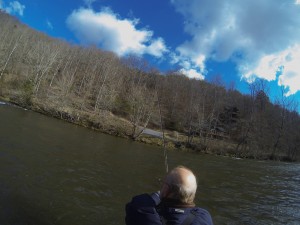