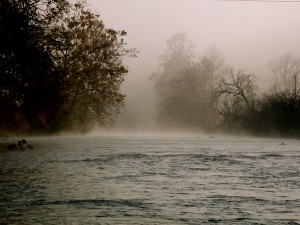 Another foggy morning on The Tuck

Today, I had the pleasure of guiding Wade (The Peanut Man) from the Columbia, SC area on a half day trip on the Tuckasegee Delayed Harvest.  It was Wade’s first fly fishing trip for trout.  We hit the river around 8am and soon found a large pod of trout to cast to.  Wade began the trip by landing several rainbows around 12-13 inches and several smaller brook trout.  That is, until he 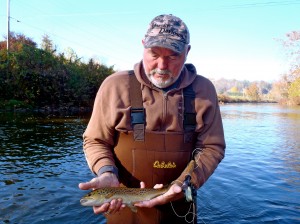 hooked into a monster rainbow that looked to be somewhere in the neighborhood of 22-24 inches.  After a short battle the bow took a hard run and snapped off the fly.  Naturally, Wade was a little disappointed to lose such a big, beautiful fish but it wasn’t long until his rod was bent by not one, but two hefty brown trout.  The first fish came in around 15-16 inches but did not have very much weight on him.  The second fish was in the 16-17 inch range and was a bit fatter and put up a heck of a fight.  All the big fish were taken on a #8 Yellow/Brown Hot Head Marvin.  Wade also landed several fish on a #18 Soft Hackle Hares Ear and a #18 Tungsten Surveyor.