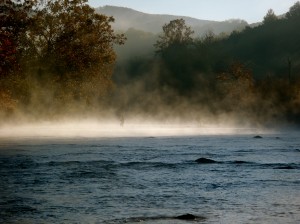 "Fog rising on the Tuck"

The Tuck has seen less pressure over the last week compared to the week before.  However, the upper section and the lower section near Carol’s Cabins have still been getting hit pretty hard especially on the weekends.  Our guides have been out for the past few days and the fishing has been hot.

Yesterday, we had three trips out on the Tuckasegee DH and everyone caught a decent amount of fish.  Most fish were taken on #8 Brown Marvins (brown and yellow/brown), #12 Y2K, and #18 Tailwater Sow Bugs. 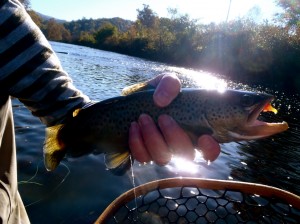 Cheryl with a nice brown

Today, I had the pleasure of guiding Cheryl F. on her first fly fishing trip.  She quickly picked up on the casting and it wasn’t long until she was hooked up on her first fish on the fly.  I soon lost count of how many fish Cheryl was bringing in.  She ended up catching a couple of brook trout near the end of the trip for the “Tuck Slam”, rainbow, brown and brook.  Way to go Cheryl!!!

Clint’s dad, John, came up to surprise Clint for his 21st birthday.  Today, they headed out to the Tuck for John’s third time fly fishing.  Clint reports that most fish were taken 0n a #18 Tailwater Sow Bug and several fish on #8 Green/Black Marvins and #10 Y2k.  John caught the big fish of the day, a 17″ brown, which was on a #12 Royal Stimulator but it broke off before they could get it into the net.

We are looking forward to the being on the water guiding for the next couple of weeks straight!  We will continue to post reports after every couple of trips. 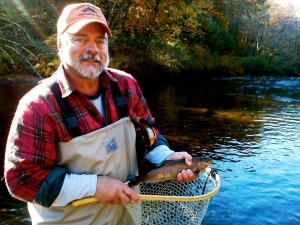 John Holcomb fishing with his son Clint on the Tuck DH