Today, I had the pleasure of meeting and guiding Bob F. from Atlanta, Ga.  This was his first time fishing the Tuckasegee Delayed Harvest.  Bob quickly got into the fish not long after we stepped into the water.  He hooked and landed around 15 rainbows in the first hour.  The big fish of the morning was a 19-20″ rainbow that gave him a really good fight before taking one last strong run and ended up breaking him off.  After an hour or so Bob hooks into what he thought was another monster 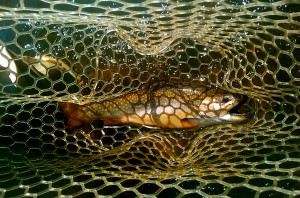 fish but we quickly found out that he had gotten a “Tuckasegee Double”, two fish at one time!  The bigger of the two fish was a beautiful 15″ Brook Trout and the smaller fish was a nice 13-14″ rainbow.   Bob ended up with two doubles for the day.  With the recent stocking it can be fairly easy to get a double if one fishes a dropper rig.  Bob was fishing a heavy Tungsten #12 Quasimodo Pheasant Tail with a #14 Y2K dropper.  Bob hooked into well over 50 fish with about half hooked on the P. Tail and half on the Y2K.  Overall a pretty good day on the water.

As far as the conditions for the day  it was overcast in the early morning with some heavy fog and sunny and clear for the rest of the day.  The West Fork was running so the water was a little higher than natural flow and  it was fairly clear.  Water temp was right around 60.  There were a few small mayflies and some decent sized caddis flies hatching.

If you are interested in booking a guide for this section of river Hookers Fly Shop and Guide Service would love to help.  We are the closest outfitter to the Tuckasegee and our guides spends hundreds of days a year fishing and guiding these waters.  You can book a 1/2, 3/4 or full day float or wade trip on this river.  Smallie fishing will be really good through the end of the month and we are still fishing many of the smaller streams in the area including the Great Smoky Mountains National Park.  We also cover the delayed harvest sections of the Nantahala and the West Fork of the Pigeon.  Call or email us for your next fly fishing adventure.