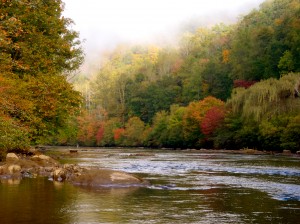 Fall on the Tuckasegee River

You probably can’t find many, if any, fly fisherman that have had a bad day on the Tuckasegee Delayed Harvest this week.  With the October stocking on Tuesday and Wednesday the river is full of fish and has been fishing extremely well.  We have had several trips out on the Delayed Harvest this week  and all the trips have been productive.  Yesterday I had the pleasure of guiding my good friend Manny T. from Greenville, SC.  This is Manny’s 5th trip with me and it was nothing short of spectacular.  Manny landed over 20 fish on our half day trip.  He was a brown shy of the Tuck grand slam but the beautiful brook trout he caught definitely made up for it.   Most fish were taken on #14 B.H. Prince Nymph and #8 Hot Head Marvins. 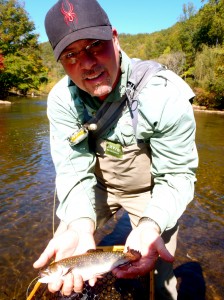 Today, I guided Brent E. and older brother Shane E. from Candler, NC.  Shane started off the day with six fish in the net in under 20 mins.  Brent ended up with close to a dozen fish by the end of the day while Shane landed somewhere around 15 or 16.  Most fish were in the 11-13 inch range with several rainbows around 16-17 inches.  Orange eggs, Hot Head Marvins and #14 Prince Nymphs were the flies of choice.