Winter Fishing on the Tuckasegee River

We are only a few days into winter fishing here in Western North Carolina and I am pleased to report that the Tuckasegee Delayed Harvest is producing as good as it did October and November.  I’ve been 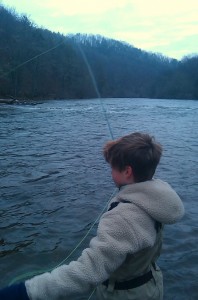 out for the past several days guiding and fishing myself and the action has been really hot.  On Saturday, I guided John C. and his 10 year old son Reed on a beginner fly fishing trip.   We hit the water around 8am, which most anglers would say is too early for winter fishing but the Tuck is a tailwater.  This means that on most days the water flowing through the Tuck is much warmer than most other streams in the area.  This usually keeps  the trout fairly active all winter long and it held true for Reed and his father.  Reed quickly got into some fish by throwing Hot Head Marvins with an Anvil Egg for the dropper.  John landed all of his trout on a #8 Olive and Black Rubberleg Wooly Bugger.  Reed managed to land 8 or 9 trout included a double with a rainbow and brown landed at the same time.  John brought 6 or 7 more trout to the net making for a fairly productive half day trip.

Today, I was able to get in a couple of hours on the river.  Most of the fish I caught were hugging the bottom.  Almost every fish came on a #12 Tungsten Olive Sexy Walt’s Worm.  The last fish of the day was the beautiful rainbow pictured below.  What a way to end the day. 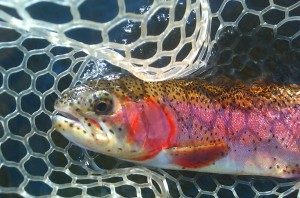 Hot Flies for the Tuck include:

If you would like to book a float or wade trip on this beautiful river please contact us.   hookersflyshop@yahoo.com or 828-587-HOOK