Fly Fishing Wade and Float Trips on the Tuckasegee River 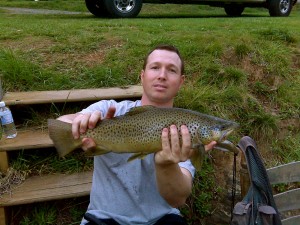 Guided wade and float trips are available year round on the Tuckasegee River.  The Tuckasegee River is another amazing trout fishery. It was recently featured in American Angler Magazine. It begins life high in the mountains as many small tributaries that converge to form an East and West Fork, both which are dammed in their upper portions, finally converging to producing one very cold tailwater fishery that contains some of the most impressive fly fishing waters in the eastern half of the country. The Tuckasegee boasts a nice long Delayed Harvest section that is very popular among fly fishers for its high fish counts, willing and very large trout. Rainbow, Brown and Brook trout are all part of the stocking program, and it’s not uncommon to catch a Rainbow or Brook over 20 inches. This section makes the Tuckasegee River arguably the hottest river in the Southeast. The “Tuck” as it is referred to, has probably as many trout per mile as any of the western rivers of Montana and Idaho. The Tuck is very user friendly, access is great along the Delayed Harvest section with the water remaining wadeable most of the time. The Tuck is also a great river to fish from a drift boat. If you really want the ultimate experience in fly fishing this watershed, then a float trip is definitely the best bet. 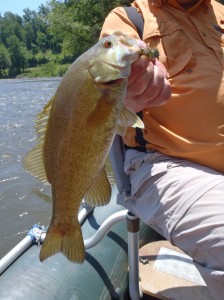 The Lower Tuck also contains trout and as the water starts to warm up further down river, you begin seeing a lot of nice Smallmouth Bass and Spotted Bass mixed in. According to a 2004 survey conducted by the TVA (Tennessee Valley Authority) on the fish quality in the region, the Tuck has the healthiest population of smallmouth in the entire TVA system of lakes and rivers! We do offer float trips below the delayed harvest section and the action is nothing short of impressive! There are not as many trout per mile as compared with the Delayed Harvest section, but with some bruiser smallmouth bass lurking behind every rock and log, you’re sure to have a great time.  In this section of river you may also hook into largemouth bass, walleye, musky, perch, and red-eye bass.

Our trips on this beautiful river are currently 20% off between now and mid March.  This includes all wade and float trips.  Book now and enjoying some fantastic fishing and some great savings.